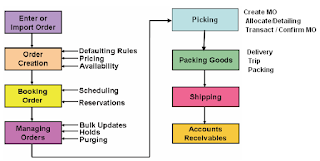 Begin by placing the order in Order Management (OM):

• Entered (OM):
Order is saved but not booked.

• Scheduled (OM):
You can customize the Workflow to show the Scheduled status
which indicates that the order line has been successfully scheduled by adding a
customized activity after the Schedule activity. This activity will make a process
Shipping 14-31
order API call to update the status to Scheduled. When the ship line logic starts, the
order line status changes to Awaiting Shipping.

• Awaiting Shipping (OM):
Order is booked and scheduled but lines have not been
picked. This status is also displayed after the line has been ship confirmed but before
the Order Management interface has been run.

• Picked (OM):
Order is booked and lines are picked.

• Open (OM):
This status of a delivery on the Additional Line Information form
indicates that none of the delivery lines associated with that delivery have been
ship confirmed.
Navigating to Shipping Execution, the delivery line status flow is:

• Ready to Release (SE):
Order line is booked and passed to Shipping Execution. It
is now a delivery line that is eligible for Pick Release.

• Not Ready to Release (SE):
A delivery line might be in this status when it is interfaced
manually into Shipping Execution, is not scheduled, and has no reservations. When
lines are imported automatically from Order Management this status is not used.

• Staged/Pick Confirmed (SE):
The delivery line is successfully pick released. It occurs
after pick confirm to indicate subinventory transfer from source location to staging
location is complete. Lines remain staged until they are ship confirmed.

• Released to Warehouse (SE):
Pick Release has started but not completed. Either no
allocations were created or allocations have not been Pick Confirmed.
Note: Both Backordered and Staged/Pick Confirmed statuses
provide the ability to perform opportunistic cross-docking for
warehouse organizations with Oracle Warehouse Management
(WMS) installed.

• Shipped (SE):
This line status indicates that the delivery associated with the delivery
lines is ship confirmed.

• Canceled (SE):
This status indicates that the delivery line was cancelled.
Navigate back to Order Management and query the order which results in OM pulling
updated Pick Release information from Shipping Execution:

• Picked (OM):
Pick release has completed normally (both allocation and pick
confirm). The delivery associated with the delivery line(s) may have also been Ship
Confirmed but the Delivery may not be set in transit and the Trip may not be closed.
14-32 Oracle Order Management Implementation Manual

• Picked Partial (OM):
This status occurs when a delivery line is not allocated the full
quantity during Pick Release and Ship Confirm has not occurred.
The delivery line splits during Ship Confirm and the information passes to
Order Management through the Process Order API. The order line splits to
reflect the changes that occurred during the Shipping process. As an example, a
customer orders quantity 50. There are 20 on hand in inventory. The delivery line
splits into two delivery lines and therefore represents two order lines in Order
Management. The order line with quantity 20 has the status of Picked or Shipped
depending on whether or not the delivery line is Ship Confirmed, the Delivery set in
transit, and the Trip closed. The second order line with a quantity of 30 has status
of Awaiting Shipping.
Shipping Execution passes the status information to Order Management when Ship
Confirm is complete:

• Shipped (OM):
The delivery associated with the line is Ship Confirmed. The
Delivery status is set to In transit. This status appears at the line level as well as in
the Additional Line Information at the Pick Status field.

• Awaiting Shipping (OM):
Awaiting information from shipping. This status will
remain until the Order Management interface is run.

• Interfaced to Receivables (OM):
Order Management has written information to
the Receivables Interface tables. You should run Auto Invoice (from Receivables)
to generate the Invoice.

• Partially Interfaced to Receivables (OM):
This status is used in a PTO flow and
indicates that the particular PTO item is required for revenue.

• Closed (OM):
Closed indicates that the line is closed. It does not necessarily indicate
that the line is interfaced to Accounts Receivable (AR) since you must close line
activity in a no-bill flow.

• Canceled (OM):
Indicates that the line is completely canceled. No further processing will occur for this line.

I am very much pleased with the contents you have mentioned. I wanted to thank you for this great article. Purchase order